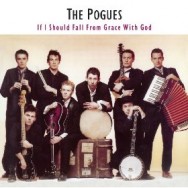 If I wanted to be fair, I’d have posted a Shane MacGowan and the Popes song to pay homage to one of my old listeners at the radio show. He would call during my old show and request “Haunted,” which at the time sort of fit into my format– I played lots of British stuff. He would call pretty often until I got into a more diverse set list– plus he changed his work schedule and I got lost in the shuffle of radio time slots. Still, he was a good and supportive figure in my early broadcasting experience. It never clicked for me that the guy who sang “Haunted” (with Sinead O’Connor) was the same guy who fronted The Pogues and sang this song. There are histories throughout the world that we’ll never know, and this was one of mine. So I played requests for the man on the phone regularly, heard about his ex-wife and daughter, and smiled when he found a new girlfriend. He found someone to request “Haunted” for by that time. And though this song isn’t as sweet, it’s full of disgruntled and disjointed romance for all to relate to. When it was voted best Christmas song of all time on BBC Radio (or something), I was proud for all who voted because it meant that they encouraged realism in a land I hoped to one day visit.